Last time I’d been to Velankanni was in 2006 to celebrate Christmas along with the family. After that we’d been planning since last two years or may be even more to visit again . I had made a vow which I had to fulfill. For some reasons, the trip kept getting delayed. Finally it was in October that the divinity came calling. Long weekend in the first week was the best bait.

Velankanni, situated in the Nagapattinam district of Tamil Nadu, is home to one of India’s biggest Catholic pilgrimage centres. It is the Basilica devoted to Our Lady Of Good Health… to me, she’s simply Mumma Mary.

We checked-in in the wee hours. Couple of hours rest, freshening up and a South Indian breakfast later, it was time for church. It was 11 am and sun was already at its beaming best. Gosh! it was blistering hot! Armed with umbrellas and scarves, we hailed a pre-booked auto and headed to the church.

The sun was killing and the crowds were maddening. There was queuing, jostling and shoving in every place. In such conditions, there was no way we could hold up our umbrellas.  It was a long weekend and people from nearby states like Andhra Pradesh and Kerala had also flocked in. There was no way we could have survived the burning heat. So after getting kebab-ed and sandwiched we decided to give up and returned to our resort.

Plan B was to visit in the evening and so we did.
The impeccably beautiful Basilica is built in Gothic style of architecture. It contains three Chapels, Our Lady’s Tank, Church Museum, Priest’s Residence, Offering Centre, Stations of the Cross, Stations of the Rosary and Shrine Mega Mahal. The Church is pristine white, except for the roof that is striking red in colour. You can feel an explosion of rapture, faith, hope and divinity everywhere!

We attended the 6.30 pm mass in Tamil, a language completely out of my world. I didn’t understand a word of what the priest was saying. But the hymns were divine. I’ve attended the Malyalam masses before, whenever I missed the English ones. And I’ve always loved their exotic hymns. Although Tamil and Malyalam are the languages beyond understanding, the sound and the rythm of their hymns touches the heart .
Cameras are banned inside the church. So couldn’t manage to click.

Hotels and lodges are generally packed, specially on weekends and public holidays. Room availability is sub-zero. With no options left, people put up in the church premises with their families and belongings. Anything for God, literally!

Offering are made for wishes to be blessed. Offering are also made after the prayers are answered. The locks, hankies and orange colour threads were tied to a sacred spot outside the church and also to some trees in the vicinity.

The Way Of Cross: Its amazing how faith makes us do the unthinkable. Even if its hurting our own selves….it doesn’t matter as far as the Lord hears our prayers, cries. Here, people walk on their knees in the sand, chanting prayers, some alone, some in groups. Some of the men even had their kids on their shoulders while they waddled through the blistering sand, exhorting the Lord. Its a kilometer to the church. Oniel, my husband, did half the distance. His knees were totally bruised and took a week to heal. Wonder what must be happening of those people who do the entire stretch! 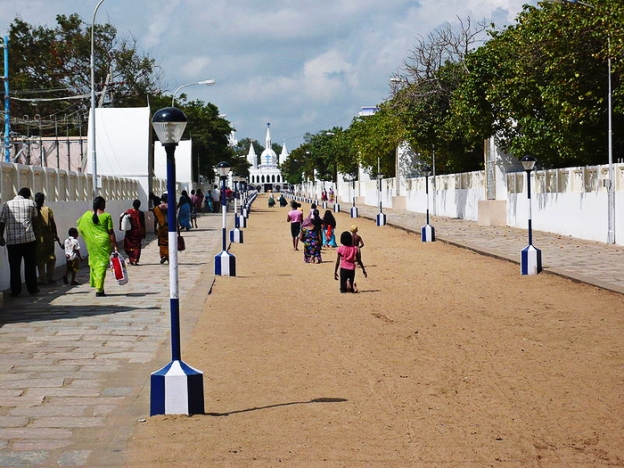 The Adoration Church : Was built as a memorial of a historic event. Its this place where the Blessed Mother Mary is believed to have appeared to a lame boy.

There are various shops that sell stuff from photo frames, threads that are said to be blessed by the priests, lockets, candles, idols, CDs of hymns, etc.

After taking a tour of the church surroundings, we headed to the market. Extremely crowded and abuzz with people from in and around Velankanni, the market is famous for each and every element it has to offer. Lets get started….

Local belles selling fresh fried fish on the road. Look at that! Doesn’t that look inviting! 🙂

Countless salons where people (ladies included) shave off their hair as an offering to the Lord. 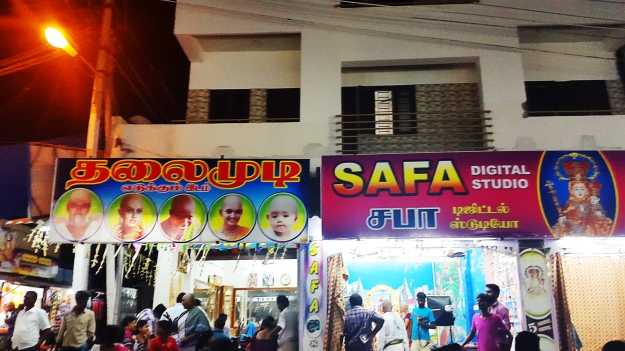 Also there are pint-sized photo studios where you can click a picture alongside an idol of Mother Mary and get an instant print-out of it. I took one as a souvenir.

Shops selling spices, sweets, South Indian style earthen ware, handis, toys, clothes.  The shopkeepers have their Pandora’s box of stories to tell about the Tsunami that hit Velankanni the most in December 2004 and how they managed to survive and hit back.

This way goes straight to the beach. Take a glimpse at the sea of people!

Tired shopping? Gorge on the traditional deep-fried wonders – Raw Banana Fritters or Daal Vada with the spicy chutney. Or gulp down some fresh, cold fruit juices and lassi.

Move ahead to the stalls that are screaming for your attention. Crabs and fresh fish drenched in colourful spices on display. Isn’t that glorious!!! All I could hear was, “come, eat me!” 🙂

Fainting was the last thing we could have on the menu. So we decided to eat.

Baskar Hotel at the end of the street offers an unobstructed view of the sea. The place is quiet extensive with a humble seating of plastic tables and chairs.

We ordered for Fried Prawns, Fried Mackerel, Fried Surmai, Flaked Parathas and Chicken Gravy. Yeah, you heard it right…fried, fried, fried… Whats wrong in cheating with the calories when there’s such glamorous food on the platter! Prawns were succulent, fish was fresh and the spice mix was awesome. Mind-blowing, super-delicious, super-yummy…all super super super…including the service!!! And that picture, is my plate 🙂

All stuffed, exhausted and happy, we headed back home. It was a perfect end to a perfect day! 🙂

To me, visit to every place is a journey, not a destination. And this journey continues with Sujata, a friend I made here. We stayed at the same resort. And how we became friends, that’s an interesting story! Chances of meeting again are rare…but you never know…We do keep in touch on Whatsapp 🙂

I went to Velankanni, hands empty and heart full of prayers. But came back with a bag full of spices, sweets, souvenirs… and a friend… 🙂

Alternatively, you can take a train from CST, Mumbai to Chennai. It takes anywhere between 23 to 25 hours.

From Chennai, its a distance of 325 Kms, i.e. around 6 hrs 30 mins drive on NH45. We liked the bus service of Rathimeena Travels. You can log on to www.rathimeena.co.in for bus timings and online booking.
Another option is you can pre-book a cab.

Staying There: There are all kinds of hotels to suit all kinds of pockets. Hotel Picnic and Hotel Seagate are at a stone’s throw distance from the church and offer good rooms and rates too. Others are VPN Residency, MGM Velankanni, Clinton Park Inn, etc. We ran out of options so booked ourselves at GS Resorts which is a bit farther.
Booking a hotel closer to the church is a good option…cuts down on travel time and cost too. Commuting is very expensive here.

Getting Around: Your hotel can help in booking an auto or a cab. Its better to pre-book and decide the cost rather than heckling with the drivers later. Language is a major barrier here so communicating with the drivers is like verbal-wrestling with all that sign-language and stuff.

Eating Out: Clinton Park Inn has a good restaurant of its own where even outsiders are allowed. Market area and the sea-side are loaded with small restaurants and eateries.

Shopping: Velankanni market is the best place to shop for sovenirs, spices, sweets and earthen utensils. The Beet-Root Halwa is a must-try.

All About Loos: Bus doesn’t halt between Chennai to Velankanni. So make sure you use the loo at the airport or railway station before starting your journey.

Few Tips: Try to plan your trip on weekdays to avoid crowds. Also plan in colder months to avoid the blistering heat.

Hiya!
I am Natasha Gracious and I love love love coffee. I think I have OCD - obsessive coffee disorder :P . When God got all weary creating the world, he created coffee to keep going. Ironically, it was tea that was my first dish... umm...beverage. I'd made it for my grandpa... at the age of six. That experience, from brewing to serving, made me realize how much I loved to cook. I like to think of myself as an adventurous foodie. Try everything at least once, is what I firmly believe. And travel... it's wonderful to have a partner who shares your passion, isn't it. Bites And Places was born so I could share the nibbles of my sojourn with you.
Life is like that perfect cup of beautifully lathered Cappuccino...brewed with love, sipped for pleasure and enjoyed by all.
Cheers!!!
Natasha